0 item in your cart
Checkout Now
×
Threadless cares about safety. Due to new precautions, orders may be delayed. Learn more.
Close this window 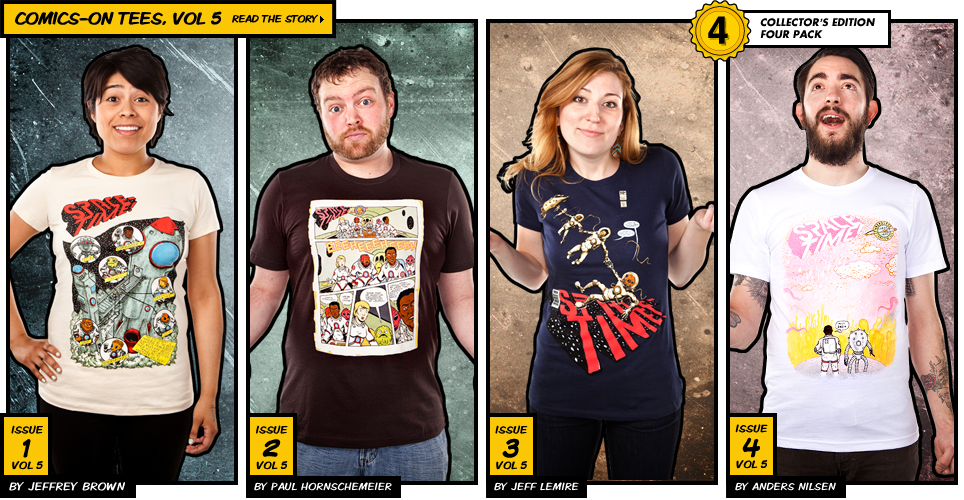 Space-Time! by Jeffrey Brown is launching today! Space-Time! began as a segment of a children's science-oriented TV show. The show featured humans and aliens traveling to explore the universe beyond the Milky Way galaxy and interspersed science experiments and factual information with segments of their adventure. Later, after the show was cancelled, the license was bought by a comic book publisher, and the comic book series Space-Time! focused on a new storyline of the explorers attempting to reach the Andromeda Galaxy. Despite planning on a three hundred issue journey with the team arriving in the Andromeda Galaxy in the last issue, the series ran for only 53 issues before being cancelled. But we’re bringing it back on tees! Each t-shirt in Space Time Comics-Ons Tees Vol. 5 corresponds to issues of the series.

Meet the Characters: Commander Konstantinov: The male human mission commander Commander Nancy: The female human mission commander Txlolgt: A small highly intelligent alien who serves as the ship's engineer and mechanic Fein: a hermaphroditic alien scientist Grof: A huge furry alien who acts as the team's muscle and heavy lifter HowbyBowby: A young alien prodigy who leads the team's research projects ST-7: A robot who records the mission and takes on tasks too dangerous for biological team members

Tee 1: Across Space-Time by Jeffrey Brown The first issue of Space-Time! established the crew and their mission, ending with them boarding their ship which would launch from earth's moon. Featuring members from most of the intelligent life forms across the milky way, the crew's mission is to travel to and explore the andromeda galaxy.

Front: The team of explorers walk across the boarding gantry to the ship, waving and smiling. Each is highlighted with a close-up shot. The excitement is tangible as the best scientists from across the milky way begin their historic mission - to travel to another galaxy!

Back: As the team approaches the ship they seem unclear how to open the door to board. Commander Konstantinov: So we just. Um. St-7: Here we go. Txlolgt: Don't put pressure on yourself, that makes it worse. Commander Nancy: Maybe we're supposed to wait...? St-7(raising arms): This is going to be great. Grof scratches his head.

Tee 2: Space Travel Is Mostly Boring by Paul Hornschemeier Issue #17 of Space-Time! was anonymously guest written (fans speculate about which sci-fi novelist is the probable author of the issue) and is known as the most cerebral and philosophical issue of the series, focusing on the realities of long-term space travel.

Front:Aboard the ship, the team sits listlessly and bored, staring out at the endless expanse of space. Suddenly, a warning klaxon wails, and the crew rushes to the controls under emergency red lighting. They study the readings on the computers. Commander Nancy: what's happening? Fein: We're off course! Txlolgt: Some kind of quantum mechanical interaction at launch... Commander Konstantinov: Look, launch was only off by less than a planck length. That's not much.

Back: Fein: that'll have us end up forty thousand light years away from our destination. Txlolgt: we'll need to calculate the correction, as well as analyze possible effects on the ship, and - St-7 presses a button. Button: beep. The crew all look at st-7. Running parallel to all of this action is a simple two-dimensional diagram of the ship flying through space with a dotted line indicating flight path. The ship makes a very slight left turn.

Tee 3: The Universe Is Trying To Stop Us by Jeff Lemire With sales flagging, the creative team behind issue #41 of Space-Time! took drastic measures and wrote a character out of the series. The gimmick worked and so a few issues later, another character left the series; by issue #49 only ST-7 and Commander K were left, although the editors made sure none of the characters were explicitly killed off, leaving room for them to return later, perhaps hoping that the unknown possibility would help maintain readers' interest.

What follows is a montage of characters leaving in different ways. Commander Nancy marries an alien they meet. Txlolgt is looking at the surface of an asteroid "No, really, you guys go on, I'll catch up." Grof is carried off by even larger aliens who have thrown him over their shoulder, like a stolen bride kind of scene. Fein is sucked into a black hole. Howbybowby is talking to his mother. "But mom, I can't come home yet, we're not even to andromeda. But. But mom... It's not fair!"

At the end, only Commander Konstantinov and ST-7 are left. St-7: "Go team?"

Tee 4: The Planets Our Destination by Anders Nilsen Despite a double-sized issue #50 selling fairly well, it was clear that Space-Time!'s days were numbered, and the announcement came that the series would end with issue #53. The final issue was rewritten to have Commander Konstantinov and ST-7 arrive on a life-supporting planet in the Andromeda Galaxy, completing their mission.

Front: The space ship has landed on an alien planet full of beautiful and strange life, plants and animals.

Commander Konstantinov and ST-7 exit the ship, and look upon the strange world, their mission finally complete.

Such a hilarious story that turned out amazing on these shirts.